Any serious injury to the body can have significant and lasting effects. However, traumatic brain injuries bring with them an even more profound set of challenges. This is true because they can have an overarching effect on a person’s ability to think, communicate, and connect with the world.

The Frontal Lobe of the Human Brain

When a traumatic brain injury occurs to the frontal area, it is impacting the brain’s largest lobe. Located at the front of each cerebral hemisphere, this lobe is responsible for conscious thought, voluntary movement, and individual personality characteristics. When you are searching for just the right word to say, it is this section of the brain upon which you rely. 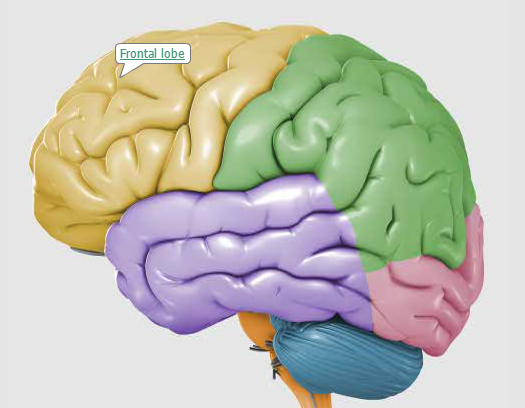 Damage to this vital lobe can cause impairments in judgment, attention span and organizational ability, as well as a loss of motivation. In addition, the frontal lobes are charged with the task of regulating mood and emotions. Consequently, when they are compromised, a patient may become impulsive, act rashly, and adopt risky behaviors such as substance abuse.

Nearly two percent of the American population, as many as 5.3 million people, today are living with the permanently disabling effects of a traumatic brain injury. Considering the many dangers that abound in our fast-paced environment, this relatively small percentage is a testament to the body’s built-in defenses that, in most circumstances, protect the brain.

Although the skull is only a quarter inch thick, it is very hard, and provides a strong first barrier. Within the skull and enveloping the brain itself are three layers of tissue collectively known as the meninges, which keeps the brain floating in the skull and further safeguards every section of the brain. If, however, the meninges become infected or torn due to disease or violent motion, traumatic brain injury occurs.

Head injuries fall into two primary categories. Open head injuries occur when the skull is pierced, such as in the case of gunshot wounds and accidents that cause skull fractures.

Because bone fragments often fly directly into the brain and cause diffuse damage, open head injuries are difficult for surgeons to treat. The second type of damage comes from closed injuries, in which the skull is not pierced, but damage occurs when the brain collides with the inside of the skull because of a concussion, or is torn or sheared against the skull due to a whipping motion of the head.

Closed injuries can cause harm to the axons or nerves in the brain, resulting in scrambling or total disappearance of the signals they normally produce.

As is the case with other traumatic brain injuries, damage to the frontal lobe most often occurs as a result of vehicle crashes, falls, and firearms. Taking steps to enhance your safety and that of your environment could save you or a loved one a lifetime of the added stress that accompanies traumatic brain injuries. Preventive measures include:

However, once brain injuries occur, there is no cure. The goal of treatment and rehabilitation is to assist the patient in strengthening the skills he or she continues to possess, while helping to find compensatory strategies for adaptation of those that are lacking.

Diagnosis and Treatment of Brain Injuries

When an individual is suspected to have a traumatic brain injury, a team of specialists assembles to guide the patient and family through the recovery process. In most cases, this group consists of several persons. A physiatrist, skilled in neurology and orthopedics, will use techniques of physical and medical rehabilitation to help the patient to regain as much functioning as possible.

A neuropsychologist will run tests to ascertain what aspects of “competence” have been lost as a result of the injury. The patient’s motor functioning, including strength, balance, coordination and movement, will be assessed by a physical therapist, who will suggest exercises and strategies for improvement. A speech consultant will be called in to focus on helping the patient with skills of expression, comprehension, and communication. Finally, a social worker generally acts as a liaison to facilitate dialogue among the patient, family, and various team members.

Initially, a number of tests are conducted to accurately determine the location and extent of the injury and to assess what skills and abilities may have suffered. These measures include magnetic resonance imaging (MRI), computer tomography (CT scans), x-rays, and other specialized tests. After the initial assessments have been conducted, the patient will generally undergo a period of rehabilitation, the duration and intensity of which will depend on the severity of the patient’s injuries.

In the case of frontal lobe damage, particular attention will be focused on helping the patient to learn strategies for curbing impulsive behaviors and regulating emotions. Since many of the symptoms of frontal lobe damage are similar to those of attention deficit disorder, researchers are conducting preliminary studies to see if these traumatic brain injury victims respond to Ritalin and other ADHD medications.

As was stated above, the goal of this multi-disciplinary intervention is not to eliminate all signs of traumatic brain injury, but instead to assist the patient and family members in understanding the new reality in which they will live. Patience and perseverance will be absolutely essential for all involved.

Since frontal lobe damage causes marked deficits in mood, personality and behavior, a patient might have to thoroughly overhaul many of his or her most basic coping and human relations strategies. By no means will this process be easy. However, with the care and expertise of all members of the team, the patient can often improve far above and beyond his or her expectations.